After much deliberation, deep-thinking and hard work, I have eventually found a decent way of cutting up the large number of pencils for the Giant’s Causeway scenery!

My Dad has lent me a Gentleman’s Saw (I wouldn’t expect him to have any other type! 🙂 ). Now I’d never heard of one of these, but it appears to be a small back-saw (or Tenon Saw), 8″ in length, and 2″ deep (including brass back), with finer teeth and a turned wooden handle. I had previously considered a tenon saw, but considered the teeth to be too rough, and feared it would rip the wood too much, leaving a ragged end, and pull chunks of wood off. 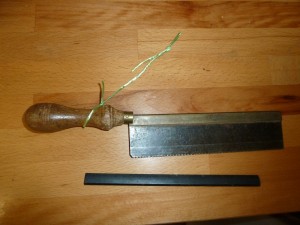 Initial testing shows that it cuts through the slim pencils with ease, leaving a reasonably smooth surface. Yes, they need filing down, but this is easy enough. I have even experimented with cutting multiple pencils at once, and found that Three Is The Magic Number! Four pencils causes too much drag, and becomes hard to hold steady. 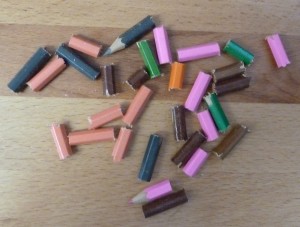 And so, without further ado, on with the scenery! I shall hopefully, armed with my new saw, be posting regular updates on the Giant’s Causeway, and looking for design ideas for putting it all together!