I was browsing Facebook the other day, when I saw a “Suggested Post” that seemed to be relevant to me! Imagine my surprise when I found out it was a small Miniatures/Scenery company, offering their wares! After a quick check of their website, I took the plunge and ordered a few bits!

Ristul’s Extraordinary Market (http://ristulsmarket.com/) are a small company based in Poland who make resin scenery pieces. The parts that initially caught my eye were the Food Crates and Baskets. 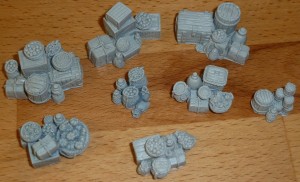 A selection of food crates and baskets.

I noticed that they also had a similar offering, but made of individual pieces (cast together on bases) : 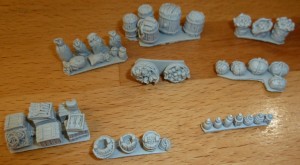 These can be cut away and used separately, unlike the first, which are larger blocks.

While browsing the rest of the site, I found a couple more sets: 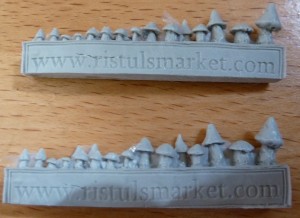 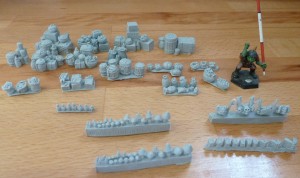 So, Do I like them?
I like the speed of response! On glancing at the website, I sent a Facebook message to Ristul with a few queries. Answered within the hour. I replied to let Ristul know I had ordered, and he gave me an estimate on timing for shipping. I ordered late Friday, so he said he’d get them out Monday Morning, should be with me by the end of the week. (website states 1-3 weeks). They arrived Saturday. Can’t complain.

The models themselves are very detailed, as I hope the photos show. The food section has a selection of apples, pumpkins, carrots, fish and others, all very nicely carved. I hope my painting does them justice! 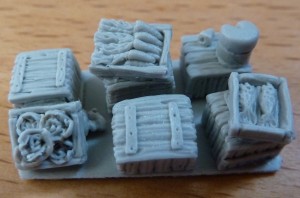 Close up of Food Containers

The mushrooms are more simplistic, but still more detailed than the ones I throw together out of spare Milliput. Should be useful for sprucing up anything Orky. I’d like to get more, but, although they are not overpriced, I’m not sure I can justify spending money on things I can make myself.
The books, on the other hand, are very nice. Small, but still well detailed, with lots of character, and the Holders really set them off nicely.

There is an amount of ‘flash’ from the moulding process on some of the pieces, especially the “runs” of mushrooms and books, but it is very flimsy, and looks like it will be no trouble to clean up. Much less than I have seen on some Games Workshop offerings! (Yes, I’m looking at you, “Fine”Cast! Yes, you should look ashamed!) But the actual pieces are very well cast – little to no mould lines, and very crisp corners, no ‘blurring’ or softened edges. There are a couple of cracks in the resin in some of the “runs”, but they are on the holding-section, not the actual pieces, so nothing to worry about.

I’ve just been gifted a new X-acto knife, so these cut-away pieces are the perfect test for it!
The thinner pieces were actually very brittle, making it easy to snap away from the scenery – useful for tidying up, but it does make me worry for the strength of the smaller pieces!
The thicker sections, on the other hand, were quite solid, and took some careful work to cut through, but, when eventually removed from the frame, looked very neat.

Price-wise, I was reasonably impressed. You can check out the individual prices on the website, but the full sets that I bought (two different Food sets, one Mushroom set (two ‘runs’), one Book set, one Book Holder set) came to a few pennies over £25 (35 Euros).

So, overall, I’m going to give a Twenty Two out of Twenty Three*, with just one mark deducted for minor ‘flash’. I recommend that you check out http://ristulsmarket.com/, as I’m sure you’ll find something you like.

*Scoring System: I decide how much I like it, and pitch an appropriate number out of an arbitrary total. The judges decision is Final. Until I change my mind, which has been known.