(Title tribute to the much-missed web-comic)

Seeing as I’ve got too many painting-projects on the go at the moment, I have decided to resurrect an old idea I had: Adding some electronic circuits to my 40k vehicles, for keeping track of their in-game status, and, just for fun, some sound-effects. 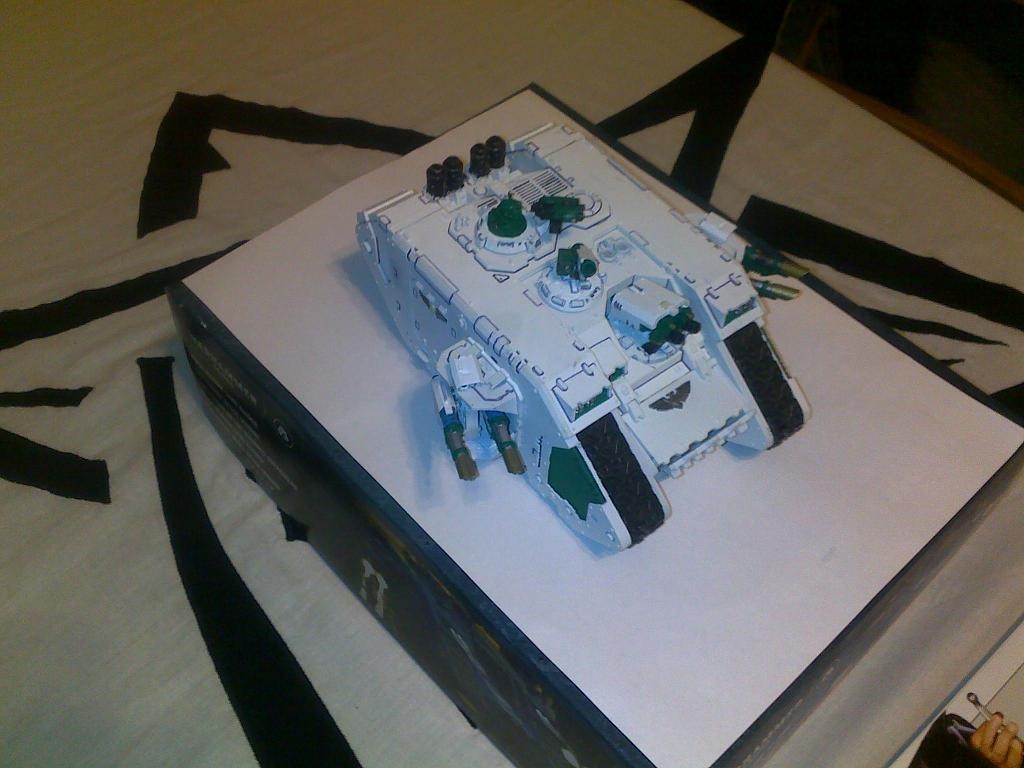 For those familiar with Warhammer 40k, I started off with a Land Raider Crusader, destined for the Death Wing of my Dark Angels army. I already have a God-Hammer, so some anti-infantry fire might be useful (translation: tank with lots of machine-guns!). Initial thoughts included a switch to indicate speed, LEDs to show remaining Hull Points, and lights and sounds for the guns and engine.

After brushing the dust from my 20+ year old electronics box, and realising there was very little worth salvaging (I think the resistors are still OK, and a few unidentified transistors), I headed to Electronics Point to get some advice. The very kind people there talked me through the relative merits of Arduino microprocessors, and I plumped for a Nano 3.0 clone (£3.50 from e-bay, rather than £15 from Maplins). I then needed to start figuring out how to program it, and design a circuit.

Several false-starts later, and a visit to Bits Box, I have a breadboard stuffed with components, and some code that lights up LEDs by pushing buttons! 🙂 And I only blew up one Arduino!* 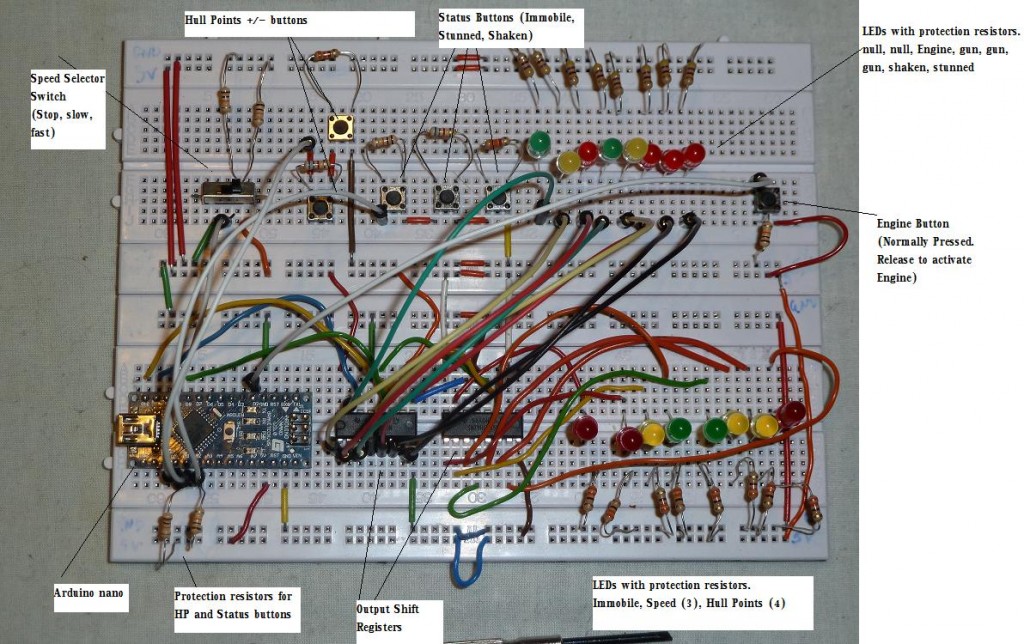 I’m using Resistor-ladders (Voltage Dividers) on Analogue pins for the inputs, reading the voltage levels to determine which buttons are pressed. Outputs to the LEDs are done with two 74HC595 Shift-Register chips. While I’m a little rusty with C++, the code is relatively simple, once you get to grips with the Arduino-specific stuff (defining pin-Numbers, remembering to set them as input or Output).

For testing, I’m powering from my PC’s USB port, but for in the field, I’ve got a 4x AA battery holder, and designed (by which I mean Googled!) a Voltage regulator circuit (7805 Chip) to drop the 6V down to a stable 5V. I can build this on a small piece of veroboard that fits onto the end of the battery holder!

I am now waiting on several things, to progress. The Audio circuit is taking longer than I expected to design/get advice one/send for parts/build. It is based around a LM386 op-amp chip, powering an 8 ohm speaker. The sound quality will not be brilliant, as the Arduino can’t cope very well with hi-fi sound. But it should be good enough. I also have to rig up an SD card reader, as I am hoping to use several files for each sound effect, and randomly choose which plays (e.g. the “Gun” sound might be a long burst, or a few short bursts.)

A friend has access to PCB etching, so I am am learning ExpressPCB to design the boards I need. So far, so frustrating! Just about got them built though (subject to expert advice). The Main Section consists of the Arduino that will not be on a board, the Shift Registers, and wires leading to LEDs/Switches (with associated resistors). These will be built into the top plate of the Tank. 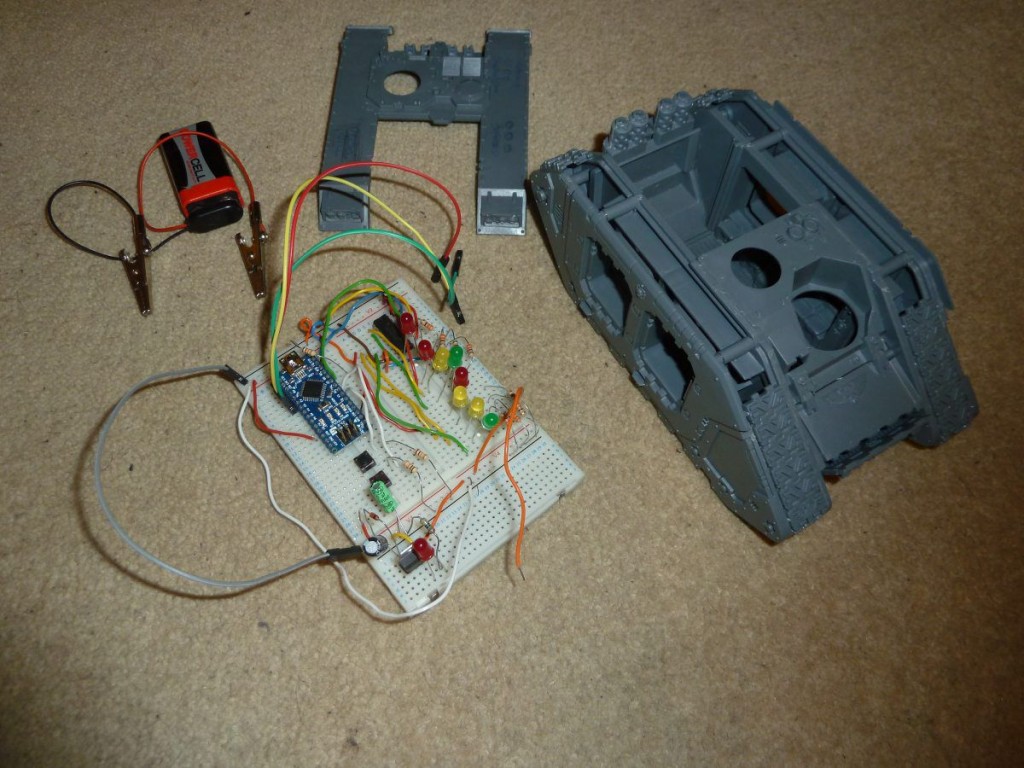 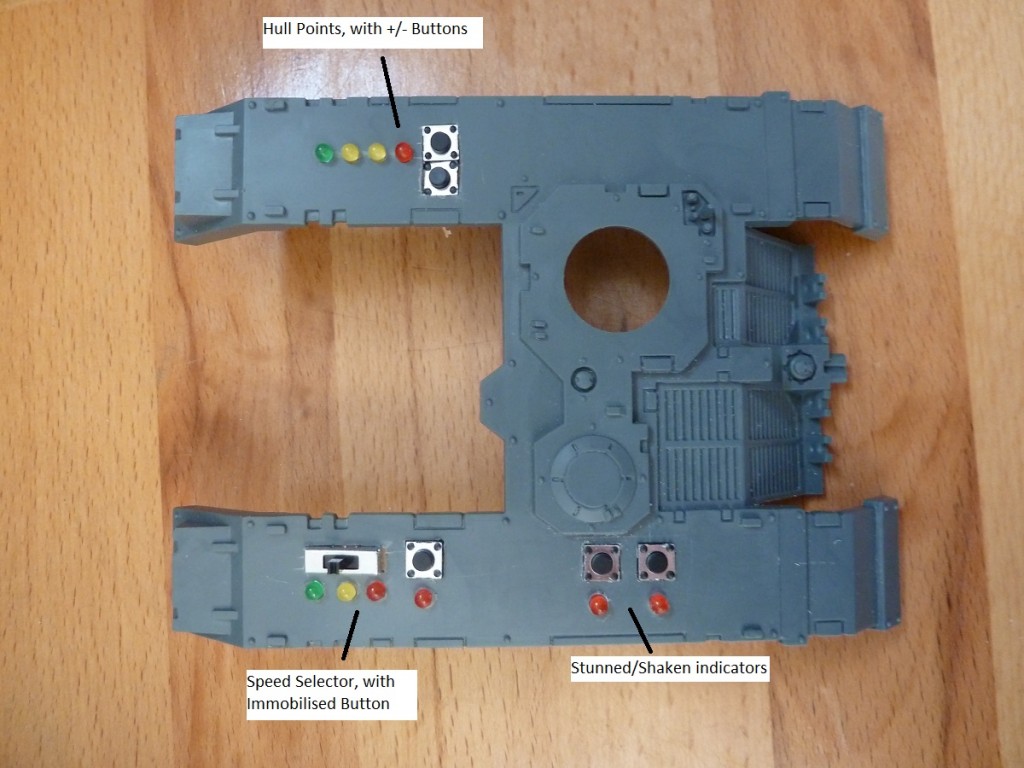 Top Plate of Land Raider with LEDs and buttons.

So, there you go!

There will be more updates as I go along, and more detail can be provided if you wish. And I may even add Turn Signals! 🙂

For now, I am going to start painting it, before loading in all the circuits, or I’ll just get paint over everything!

*(Pro-tip: Do not short-circuit the 5V pin of an Arduino directly to the GND pin!)