Several packs of pencils, a Dremel and some PVA later, I now have the basics of my Giant’s Causeway! There’s still a long way to go, but I can see how it will come together.

I have expanded each section so that it is just larger than a standard model base, and looked at how to include all the pencil points. 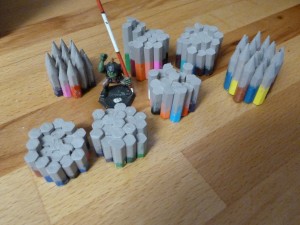 These pieces will fit together to form a larger piece, that will then be glued into place. It’s just going to take a lot of cutting up of pencils!

I did get some longer pencils, so I’ll  have less points to deal with, as I’m not over happy with how they come out. Maybe a spray with rough-coat will take the edge off them? 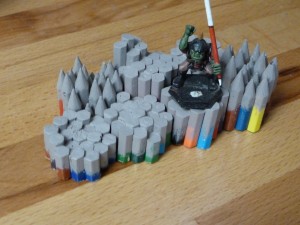 Beginnings of a Causeway

Once I’ve got enough to cover a square (hex) foot or more , I’ll glue them all in place and paint them up. For now, more cutting. And filing down the rough edges. And clearing up all the sawdust. And finding somewhere to store them all.
Oh, the hardships of being a model-terrain builder!

To expand on the hexagonal buildings I have made, I picked up a bunch of cheap pencils. 48 for £1. Can’t say no, really. 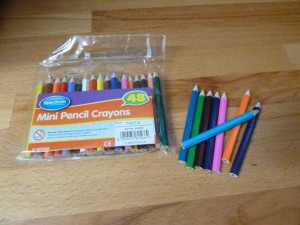 The first step was to cut them to various lengths. Harder than it looks, when you don’t have the right tools! Making do with a junior hacksaw, I managed to carve up a dozen or so: 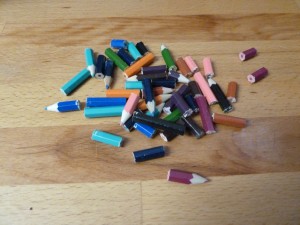 I’m planning on incorporating the pointed ends, but to start with, I’ll just be making some hexes from the flat-ended pieces. The cuts needed sanding down, and my file is too small and too blunt (due to years of use and abuse), so I invested in a foam sanding block (£1.70 from Wilkos). This was a mistake. I have ripped most of the rough surface from it already! Not the right tool. I suggest a metal file.
But I now have a bunch of hexagonal bits of wood. Picking seven of roughly equal length, they are glued together into a larger hexagon. Rinse and repeat.

These hexagonal pieces can then be linked together to form a larger landscape. Some of the later pieces will have ‘spikes’ in them (sharp pencil-ends!), and hopefully it will stretch to at least a square foot (~300mm x 300mm in new money). 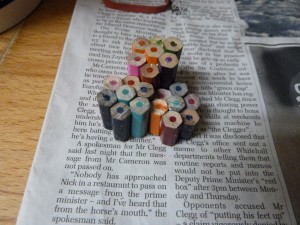 So there you have it! A Giant’s Causeway type effect, and the only real effort is cutting up the pencils. I’m not sure if power tools are the way to go for cutting them, as you could easily end up with them flying all over the place, or ripping sections off. So hand-saw it is.

Obviously, it will need a lick of paint, and some flock scattering about. More pics when I’ve got to that stage.

Unfortunately, support was withdrawn, and now very few people play. Which is a shame, as scenery for Epic Scale is very easy to make!

My original Matchbox buildings were designed for Epic Scale, as evidenced by the small Ork Battlewagons used for scale alongside a 40k “Barry”.
Being small, just about anything could be turned to scenery for Epic Scale, with yoghurt pots and blister packs forming a great deal of our battlefields. Hills were formed from off-cuts of polystyrene and empty paint pots were saved to become silos and towers.

With 32mm scale WH 40k getting all the attention, Epic Scale passed into the mists of HIstory, and scenery had to become larger. Matchboxes would only make small houses rather than fortresses. yoghurt pots are now tents or makeshift shelters and paint pots are little larger than tank traps. To fashion large, impressive scenery, more raw material is needed, and many previous inspirations are sadly unusable. (Another effect was that more detail had to be modelled, but that is another story).

The knock-on effects of this meant that more space is needed for storing material, workbenches need to be larger, and pieces waiting while their paint/glue dries take up a lot more space. When making particularly large or numerous pieces, it means eating of your lap for a week, as the dining table is set over to construction.

The main loss is the sheer amount of day-to-day items that I look at and think “That would make a great building!” only to realise that I am still thinking on Epic scale, and 40k-scale models would be able to step clean over it.

Ah, for the halcyon days of yore!