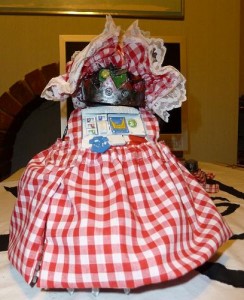 HA! Me looted a Stompy! 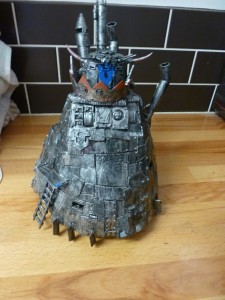 As i won’t always be playing the scale of game that allows for Super-Heavies (such as this Stompa), I’ll be using it as Scenery – maybe it is broken, and needs to be salvaged, or I could build a repair-shop around it. Or it could be a shrine to Gork (or is it Mork?).

(See, even though I haven’t done any new scenery, and want to build my Stompa, I can still justify it as Scenery! EVERYTHING is scenery! 🙂 )

As you can see, the original owner has primed it in Metal (black base coat, heavy Silver dry-brush). This is similar to my usual start, but for this model, I have had a new idea. As a lot of the 40k forums refer to the lower armour plating as a “Skirt”, I first thought I might paint it in tartan to match my McHaggis orks 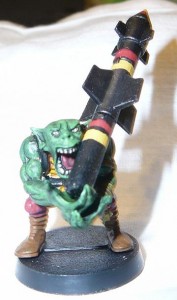 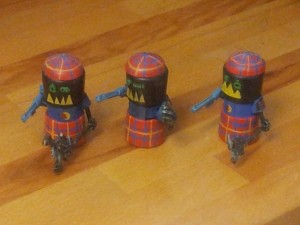 but then I thought that a much scarier idea would be to have it in a flowery summer dress, maybe something from Laura Ashley.  But this looked an absolute swine to paint, and I can’t model those heels, so … my mind wandered. Summer dresses … plaid … young girls skipping across the meadows … and it hit me! GINGHAM! 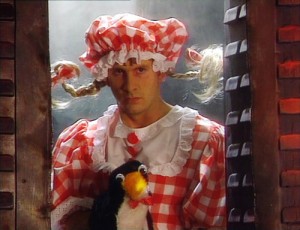 OK, its still going to be a tough paint-job, and sourcing the right sized penguin-puppet could be a task in itself, but once it is on the battlefield (either as Super-Heavy War Machine of Doom, or Shrine To Mork (or was it Gork?), the foe will be quaking in their boots!